The bull market in stocks that began after the 2008 financial crisis wears a Made in America label. In the eight years since then, U.S. stocks have trounced their foreign counterparts, as investors the world over bet on America’s slow but steady economic recovery and the fast-growing tech and social-media companies that dominate our market. Europe, on the other hand, has offered up serial political and banking crises; Japan, economic stagnation; and emerging markets, variants of all three.

Now the tables look to be turning. Overseas markets have attracted more investment fund flows this year than the U.S., reflecting a seemingly savvy bet by investors that the performance gap will narrow, or even close. The timing looks right: Given attractive valuations, diminished political risk, low interest rates, and a pickup in global growth, international markets, and Europe in particular, could finally start to outperform.

The Standard & Poor’s 500 stock index returned 215% in the past eight years (through April 30), including reinvested dividends, and is 50% above its 2007 high. By comparison, the Stoxx Europe 600 index returned 105% in that span in dollar terms, and remains below its 2007 high. The most popular foreign-stock benchmark, the MSCI EAFE index—which tracks 21 developed-country markets outside the U.S. and Canada—has returned a total 97% in dollars, and remains 20% below its former record, set in 2007. Europe accounts for more than two-thirds of the capitalization of EAFE.

“The S&P 500 has rarely been this popular,” says Darren Pollock of Cheviot Value Management. “It is hard to buy the unloved, but that’s what gives investors an edge.” 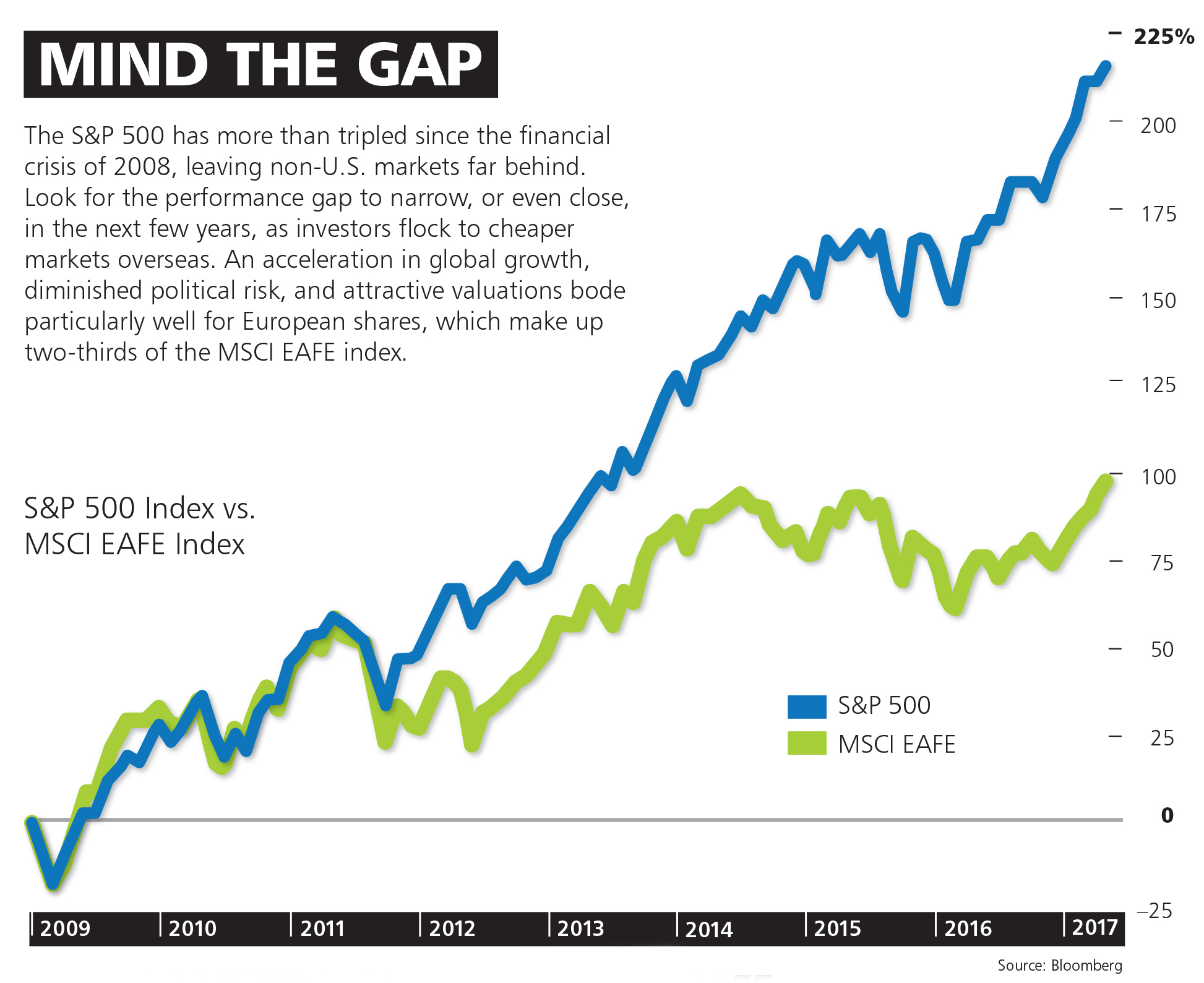 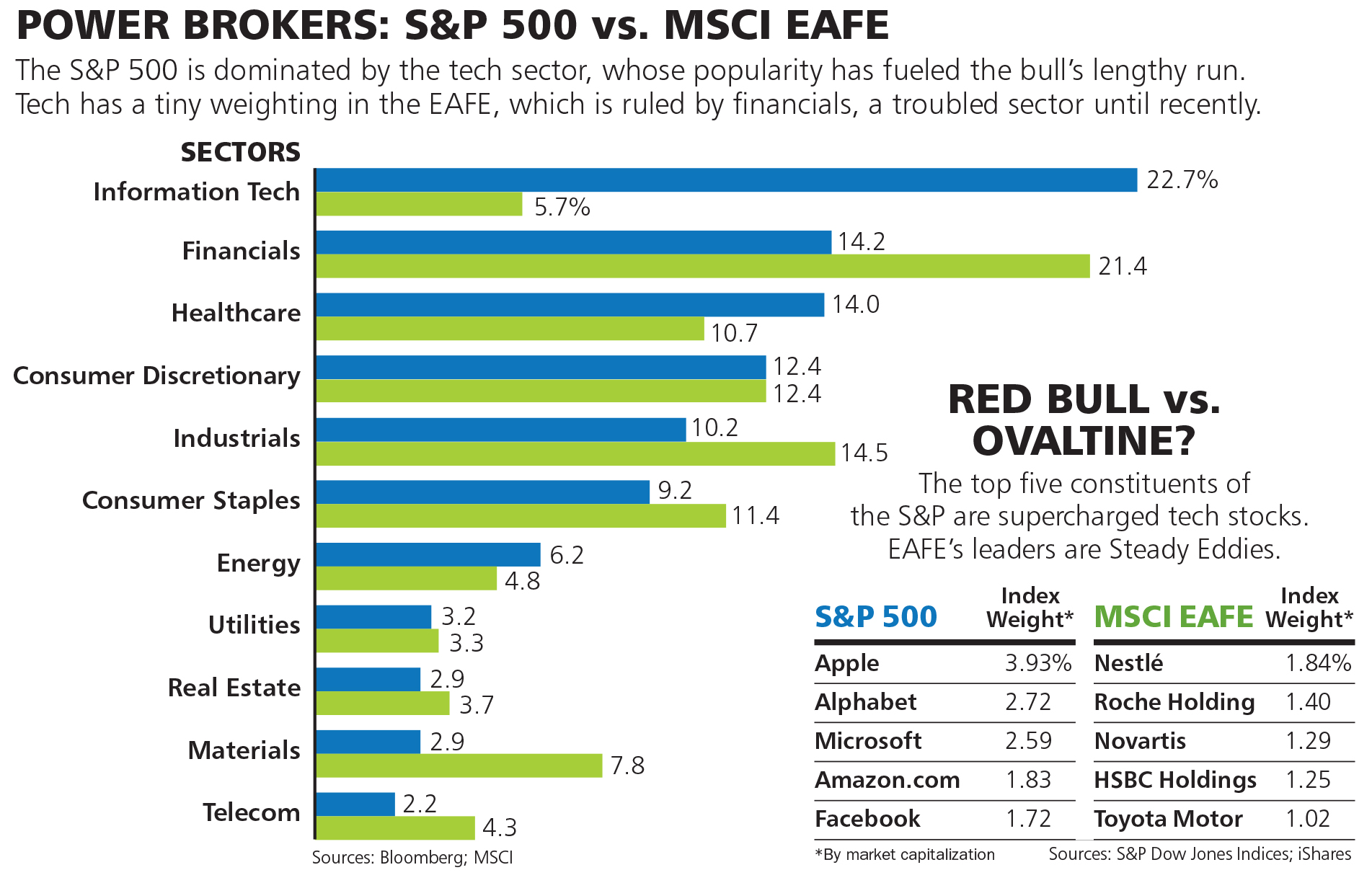 Indeed, the performance baton might have been passed already: The EAFE index outperformed the S&P 500 in the first quarter of 2017, returning 7.4% versus 6%. Emerging markets rallied 12%, and likewise could see further gains. Research Affiliates expects EAFE and emerging market equities to post the fattest investment returns of any asset class in the next 10 years, albeit with greater volatility.

After nearly a decade of U.S. dominance, investors could be forgiven for thinking the U.S. always rules. To the contrary, there have been many periods in which U.S. stocks underperformed foreign shares. From 1983 to 1988, for example, EAFE outperformed the S&P by more than 300%, due to a megarally in Japanese shares. EAFE led again, by 81%, from 2002 through 2007.

The long stretch of U.S. outperformance has lulled investors to sleep, says Matthew McAleer, a portfolio manager at Cumberland Advisors, who notes that U.S. institutional investors’ allocation to international stocks stood at a 25-year low of 18% as of the end of 2016, compared with a historical average of 28%. Cumberland upped its allocation to international stocks last year to 40% from 30%, and lowered its U.S. weighting to 60%.

The firm owns the iShares Europe exchange-traded fund, Wisdom Tree Europe Hedged Equity, and iShares MSCI All Country Asia Ex-Japan, a mix of Asian developed and emerging market stocks. There are many other international and Europe-centered ETFs to choose from, including iShares MSCI EAFE, Vanguard FTSE Europe, and Wisdom Tree International Equity. Among country funds, iShares MSCI Germany offers a play on the Continent’s economic engine.

THE CASE FOR A REVIVAL in European stocks, particularly the Continent’s many multinationals, rests in large part on expectations for improving global growth. The International Monetary Fund recently lifted its global growth forecast for 2017 to 3.5% from 3.4%. The more salient news is that global growth, which fell to 3.1% last year from 3.4% in 2015, seems to be regaining momentum.

“There are green shoots of activity” around the world, says Karyn Cavanaugh, a market strategist at Voya Investment Management. Overseas purchasing-manager indexes are strong, she notes, with Germany’s at a six-year high. Japanese business confidence is rising and manufacturing is doing well.

Global growth is good for U.S. multinationals, but even better for many non-U.S. companies, which tend to be cyclical in nature, says Harry Hartford, a portfolio manager at Causeway Capital Management. EAFE components also have more sales exposure than American companies to the rest of the world, especially emerging markets. “You’ll see better earnings growth from this,” he predicts.

Analysts estimate that European companies generate almost 50% of revenue outside Europe. S&P 500 components get roughly 30% of revenue from overseas, according to a recent report from Goldman Sachs.

A stronger dollar has been another factor in boosting U.S. performance. The Dollar Index, which measures the U.S. dollar against major world currencies, has risen 25% since the middle of 2014. That advance is “nearer to a cycle end, and [currency] should become a tailwind” for non-U.S. markets, says Alan Robinson, a global portfolio manager at RBC Wealth Management.

WITH THE JUMP IN economic growth, European companies could see substantial gains in corporate earnings. S&P 500 profits long ago surpassed a 2007 high, but EAFE profits remain 45% below their prior peak, notes Doug Ramsey, chief investment officer of the Leuthold Group. 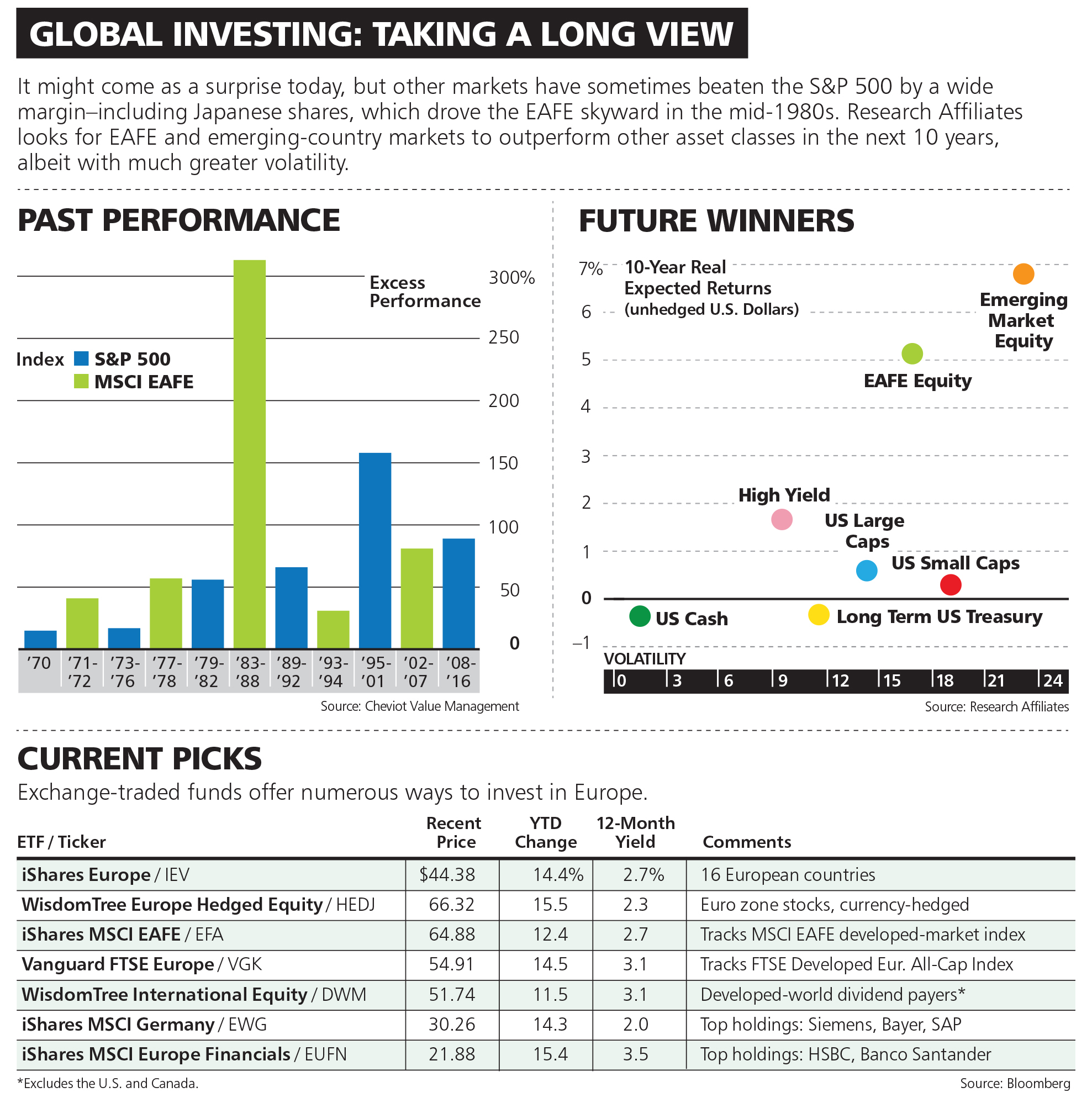 Industry analysts look for EAFE earnings to increase by 18% to 19% this year, compared with an estimated gain of 10% in U.S. profits. While this rise comes off a low base for overseas stocks, it’s the direction and momentum that count most for investors. “We are in a normalization period” in which EAFE earnings will catch up with the U.S., says Savita Subramanian, head of U.S. equity and quantitative strategy at Bank of America Merrill Lynch. Subramanian recommends underweighting the S&P 500 relative to other markets, and notes that positive earnings revisions have been more numerous lately in Europe and Japan than the U.S.

One reason for that is EAFE components’ greater leverage to revenue growth, a consequence, in part, of higher fixed costs. Goldman Sachs calculates that a 1% increase in revenue at U.S. companies translates into a 1.8% jump in earnings. In Europe, the same 1% gain produces a 2.8% increase in profits. In Japan, the profit increase is 3.6%.

To a large degree, index structure has favored the S&P 500 in recent years over MSCI EAFE and the Stoxx Europe 600. Tech stocks account for more than 22% of the S&P, compared with only 5.7% of EAFE, and tech is the sector investors have been most eager to own. Apple, Microsoft, Amazon.com, and Facebook were the S&P’s largest components, based on market capitalization, as of May 9, reflecting their enormous gains in recent years. That said, most big tech stocks are far from cheap, and similar outperformance in the next five years seems a tall order.

EAFE, in contrast, has a 21% weighting in financial stocks, chiefly European banks, although its largest components are Switzerland’s Nestle, Roche Holding, and Novartis. Since the financial crisis, it has been hard to find a reason to own the banks, at least until recently. Europe’s big banks were much slower than U.S. institutions to repair their balance sheets after the crisis, although they look to have reached an inflection point, notes Causeway’s Hartford. “The deterioration is over,” he says.

In a report published last month, CreditSights, a credit-analysis firm, indicated that asset quality at European banks has improved “considerably.” The median ratio of nonperforming loans to total loans fell to 2.7% in 2016 from 3.4% in 2015, and substantially higher levels in prior years, reflecting the cleanup efforts of Italian and British banks, in particular. Financial stocks account for 14% of the S&P 500.

Among European banks, Stephen Auth, chief investment officer of equity at Federated Investors, favors France’s BNP Paribas. Auth, who says Federated will be adding EAFE stocks to its global allocation model in the next year, notes that BNP’s profit improvement is “earlier in the game” than competing institutions, and calls the stock, at 0.88 times tangible book value and 11 times this year’s expected earnings, “cheap.” 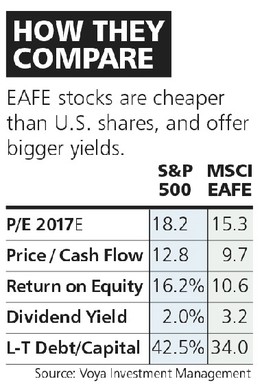 The iShares MSCI Europe Financials offers broader exposure to European banks. The fund is up 15% year to date, but has yet to surpass its mid-2014 high.

By almost any measure, European stocks are trading at a discount to U.S. shares. The Stoxx Europe 600 sports a price/earnings multiple of 16 times this year’s expected earnings, just above the EAFE’s 15 times. The S&P trades for a loftier 18 times. “Historically, the U.S. premium has been one to 1.5 multiple points, not three,” says David Donabedian, chief investment officer at Atlantic Trust.

Valuation isn’t enough of a reason for international stocks to outperform, but better earnings growth could be a catalyst. “The U.S. is much closer to peak earnings than Europe,” he says. Dividend yields also favor foreign stocks. EAFE components yield 3%, compared with 2% for the S&P.

ANY DISCUSSION OF the second-longest bull market in U.S. history has to acknowledge the critical role of the Federal Reserve, whose postcrisis policies reduced U.S. interest rates to near zero, setting the stage for risk assets to soar in price. The Fed’s quantitative easing and aggressive rate cutting were “way out in front of the rest of the world,” says Joseph Quinlan, chief market strategist at U.S. Trust.

For a while, the European Central Bank “had cement shoes on,” he quips. It actually raised rates in 2011. Since then, however, the ECB and Bank of Japan have followed the Fed’s lead and remain in easing mode, even though the U.S. central bank is slowly raising interest rates. The latest monetary-policy divergence will increase liquidity outside the U.S. and is expected to have a positive impact on European stocks.

While many factors now favor international stocks disproportionately, foreign markets aren’t without potential pitfalls. The U.S. dollar could get a second wind, surging against other currencies, which would hurt the performance of non-U.S. markets. Political uncertainty has ebbed regarding the fate of the European Union, especially after the French presidential election, but Britain’s divorce negotiations with the EU could produce unpleasant headlines.

Demographics in both Europe and Japan aren’t as supportive of long-term growth as those in the U.S., and insurgent nationalism remains a threat in Europe, notwithstanding this month’s win in France by centrist candidate Emmanuel Macron.

WHAT WOULD HAPPEN to international shares if U.S. stocks correct sharply, or enter a bear market? Benjamin Segal, who runs the Neuberger Berman International Equity fund, says his expectation for EAFE outperformance isn’t predicated on the U.S. bull’s continued run.

If U.S. stocks retreat, “people will look to value stocks elsewhere,” he says, noting that EAFE components are cheaper. He likes the prospects for Unilever (UL), the consumer-goods conglomerate, and software giant SAP (SAP).

The past eight years have made it seem that U.S. outperformance is a given. But history, economic trends, and comparative valuations suggest a leadership change is in the offing, which could benefit Europe and other international markets for a considerable period of time.